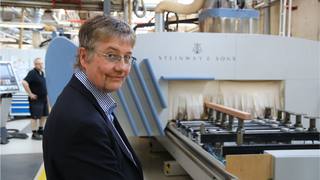 Burning it to the Ground 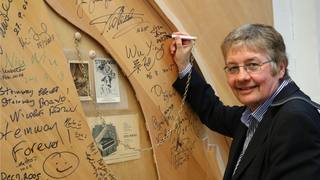 At the Steinway Factory in Hamburg 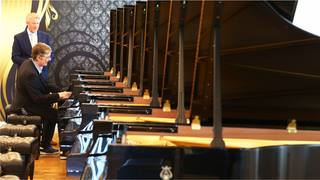 Don Airey on the Steinway Sound, finding Space, Piano vs. Organ, the Legacy of Deep Purple, and Life beyond the Band

Don Airey is the current — and likely final — keyboardist for the rock band Deep Purple, who are currently engaged on ‘The Long Goodbye Tour.’ Deep Purple formed in 1968 and now in its eighth iteration of players (or “Mark 8”), and the band has collectively released twenty studio albums. Before teaming up with Deep Purple in 2001, Airey played with the likes of Black Sabbath, ELO, Judas Priest, Jethro Tull, and Whitesnake, yet he began as a student of classical music. Airey recently became a Steinway Artist, and, in town for a gig, took a tour of Steinway & Sons’ Hamburg factory, where he played an impromptu solo recital for the craftsmen. The following evening, he performed with Deep Purple at Barclaycard Arena. Airey spoke to us at the factory.

Don, I’ve got you fresh off a tour of the Hamburg Steinway factory. You’ve had the privilege of owning a Steinway since childhood. What was it like to finally see how they are crafted?

Well, it’s sort of like coming home — to see how it’s actually done. You wonder when you play one. My Steinway was built in 1895. In 2008, I had it completely restored — restrung, the soundboard polished, new action put in. I was thinking: ‘How are they going to put a new action in? Easy. Send for one from New York, and in it went. It was astounding that something that was made that long ago, in the century before last, can be repaired with new materials. It just says so much about the company, and you realize what you’re dealing with: the most beautiful sound on earth.

You play on acoustic instruments and digital keyboards as well. How does your approach differ?
In some ways, a Steinway is easier to play than a Kurzweil PC3, because they haven’t quite got the tuning and the overtones right on a digital piano. Jim was showing me something about the double-stopping on a Steinway that makes the sound fuller — you just won’t get that on a digital piano. Electronic keyboards are useful things to have in the musical field I find myself, but the basis for my technique is on the piano. When I get home from tour, my wife says I vanish for a couple days because I have to readjust. I go back to my piano and play all these scales. And then I allow myself to actually play some music again.

Jesse Carmichael from Maroon 5 told me something similar: "It physically connects me back to being home."
I won’t lie to you. A funny thing about my Steinway: it emits a smell if it likes you. I kid you not. My daughter sometimes plays it — she could have been quite good if she’d studied! — but when she plays it, it loves her! The wood just opens up — and you can smell it. Honestly, you can.

For the craftsmen in the factory today, you played some classical, some Fats Waller, and we heard a wonderfully fugal “Smoke on the Water.” Your background was in classical, and then you drifted toward rock, jazz and blues. Is that a fair way of putting it?
I got very interested in jazz as a teenager, just buying records at the junk shops and discovering people like Bill Evans, Jimmy Smith, John Coltrane. Mind-blowing! I was from the north of England, and you didn’t have the access to media like you do today. Everything was a mystery. And the radio in England was just terrible — it wouldn’t even play pop music, let alone jazz! If it played jazz, it would just be New Orleans and that was it. I had an ambition to be a classical pianist, and I just wasn’t good enough. You’ve got to have that extra-special thing to be that good — and then to make it. It’s very daunting. I got to the point where I got my degree, I got my diploma, and I thought ‘I’ve got to earn a living!’ And the phone went — that very second!

And who was on the other end?
It was an agent from London, saying ‘I’ve heard your band’s very good. Do you want to go on a cruise for three months?’ I said, ‘I’ll sleep on it.’ [Snores quickly.] ‘Yes!’ So we just packed all our gear into one car and drove to Southampton and got on this cruise liner and sailed around the world — for a year, actually! So that was my start and it was a great start. I had an ambition to be a classical pianist, and I just wasn’t good enough. You’ve got to have that extra-special thing to be that good — and then to make it.

I had an ambition to be a classical pianist, and I just wasn’t good enough. You’ve got to have that extra-special thing to be that good — and then to make it.

I played keyboard for a few bands in my distant past and remember struggling to figure out where does the keyboardist in these funk, blues and rock bands live? Where did I fit into the sound so I’m not stepping on vocals and stepping on — or doubling — the guitar? Deep Purple has done so much for carving out a space for that organ sound, and you have carried that standard for the past fifteen years. Can you talk a bit about creating that space, within rock, for the keyboard?
That space is exactly between the bass and the guitar. You really are playing with the bass player, that’s your first job. (And hopefully he’s playing with the drummer.) But you’ve really got to play with the bassist. And then just keep one ear open for what the guitar’s doing. I’ve always found that my job has been to make the guitar player feel comfortable, to bring the best out of him. They come up with the riffs. You don’t really come up with riffs on keyboards. But there’s always the problem of ‘How shall we start the song?’ or ‘Where do we go to after the riff’s over? What do we do now?’ so you come up with the bridge, maybe. I mean that’s what I used to with Ritchie [Blackmore]. He’d have all these amazing ideas, and he’d go ‘Hmm… what now?’ and I’d say ‘How ’bout this?’ and he’d say ‘Yeah, I’ll try that.’ [Laughs.]

So you’re a bit rhythm section — almost jazz trio style — and then a bit connective glue.
Yeah, exactly the word: the glue. You’ve got to glue it all together. And the best keyboard to do that is a Hammond.

Being a ‘pianist first,’ does that affect your approach on organ?
It’s a different technique, playing a Hammond. You don’t have to be so exact, as you do on a piano. There’s plenty of leeway. It’s got to be rough and ready and you got to lean into it, the Hammond, whereas at a piano you keep your distance. With a Hammond, you gotta lean in to the sound and just try to get it roaring. There’s a specific moment — it happened to me last night at the Luxembourg gig, you know, ten gigs into the tour — somehow, I felt it go, I felt the Hammond really surge.

So maybe you’re adjusting to that organ the same way, when you get home, you sink back into your Steinway.
They’re not easy instruments to play. Whereas a Steinway will give you something back, a Hammond gives you nothing. Just takes everything out of you, man — and doesn’t care! [Laughs.]

This is billed as ‘The Long Goodbye Tour’ for Deep Purple. How long is a piece of string? Yes. [Laughs.]
I first think of the Robert Altman film. Elliott Gould. Classic. But second, Deep Purple is an institution at this point — Well, we should be in one, that’s for sure. [Laughs.]

Do you think this is a farewell?
It’s very likely that this is the farewell tour, and all good things come to an end. The best job I’ve ever had in my life has been playing with Deep Purple.

What has been the impact of Deep Purple on your life —
Well instead of the bank manager writing me nasty letters, I write nasty letters to him. [Laughs.] I’m only kidding. It’s not an easy job. Normally, as a keyboard player, you’re looking down the set list going: ‘We’re four numbers in, I’d better get it all together’ but with Purple it’s like, ‘Oh God! Next song!’ The current show is driving me mental because there’s so much for me to do. If it’s easy, there’s no fun in it. With Purple, it’s always been fun.

But you can’t phone it in.
No, you’ve got to be there. And that’s the thing about it: we’re the real thing. And it’s why so many kids come to see us, because they want to see a real band and they know we’re not faking anything.

What’s the Deep Purple legacy?
They carried the torch for the British rock movement in the early Seventies, but they threw it wide open. If you think of [Black] Sabbath, Sabbath plowed a certain niche, and [Led] Zeppelin, too, but Purple opened everything up to everything. The music is elastic: you can do anything with it you want. We’ve toured with orchestras. A classical violinist, Lidia Baich, joined us in Vienna; I wrote some parts for her. It was sensational that a top classical performer could play with us, and she brought the house down — playing heavy rock! Purple crossed a lot of boundaries. They opened everything up. They had pop hits, rock hits, orchestral hits. It’s quite something. Jon Lord and Ritchie Blackmore, between them, cooked up a hell of a meal.

Where do you want to go from here?
Me? They say, ‘Do you ever think of retiring?’ I say, ‘I think of nothing else!’ [Laughs.] I have it in my head that I want to do some more on the piano. But after today’s shoddy performance, I think I may go back to gardening. I’ve made a piano album, actually, to be released later this year once the Purple hoo-ha has died down. Yeah, I’d like to play the piano more, but whether I’m still in shape to do that….

Well, you can always get back on that horse, right? It will always welcome you back.
Maybe. I’m gonna practice hard over the summer!