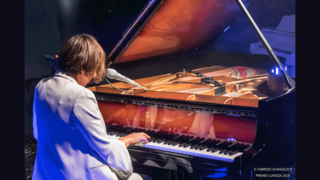 On the 2nd of September Italians most smoky voice Gianna Nannini received the Premio Lunezia Prize 2018 at Teatro Civico in the northern Italian city of La Spezia. This award honored her long and amazing musical commitment - especially the literary quality of her lyrics. These were read out by actors during that solemn evening.

The finale of this performance: The singer herself entered the stage, the luminous lid of the Steinway Sunburst grand piano opened. The audience fell silent. Gianna Nannini sang three wonderful songs, "Notti senza cuore", "Oh marinaio" and "Meravigliosa creatura" in her rocking and at the same time soulful style, playing the Sunburst grand piano herself.

Gianna Nannini, Steinway Artist since 2004, studied piano and composition. She thanked Steinway & Sons for the fruitful cooperation. In her Milan home she always plays and composes on Steinway´s A-grand piano.